Our conceptual approach here is part international thriller, part sci-fi narrative—after all, the UN is the model for Star Trek’s Federation, whose Prime directives closely mirrored those of the UN at the time of its inception. Working with existing stills and footage culled from various UN agencies and NGOs, we came at our subject matter through various refracted lenses and this delivers the general aesthetic tone of the film: cool filters and the fearless symmetry of moving parts. Just like the United Nations. 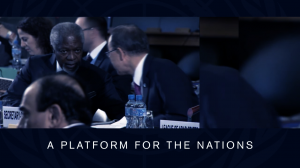